There was the rector’s meeting with first year students of the Higher College. The students were greeted by the Vice-Rector for Academic Affairs, Candidate of Historical Sciences, and Associate Professor Bibigul Abenova. “We believe that you made a good choice. After all, our university is one of the largest universities in Western Kazakhstan and is known for its achievements not only in the country, but also abroad. I also want to note that Zhubanov University took the 7th place among 58 universities of the country“ said Bibigul Seilovna. At the same time, she urged students not to waste time and devote themselves to study and science.

Then, the inspector of the Zarechensky department of the juvenile police of the city Internal Affairs Department, Major Altyn Zharmakhanova, spoke about the most frequent cases of administrative violations and measures to bring the perpetrators to justice. Altyn Turzhanovna gave several life examples.

Tulegen Taldybaev, Deputy Director of the Ansar Information and Analytical Center, spoke about preventing religious extremism and terrorism, as well as protecting young people from illegal currents. According to the religious expert, it is necessary to seek answers to the questions of interest from qualified specialists. At the end of his speech Tulegen Umirzakovich wished the first year students set high life goals.

At the end of the meeting, Akzhainak Sagyntayeva and Dinar Esenaly, students of the 1st course specialty “Teacher of Kazakh Language and Literature”expressed their greetings. Both girls are holders of the “Altyn belgy”. Unfortunately, they failed to win a competition for awarding state grants to a higher educational institution. However, by the will of fate, they were fortunate enough to receive the opportunity to study free of charge at the Higher College.

Also Talgat Almatov, who is educated in the specialty “Jurisprudence”, shared his emotions. “I did not hesitate to choose a college at Zhubanov University. It is a large and famous university. After college I plan to enter the ARSU named after K. Zhubanov on the specialty “State and local government”.

The higher college was opened on the basis of Zhubanov University in the current year. For today’s day in the college is studying 370 students. 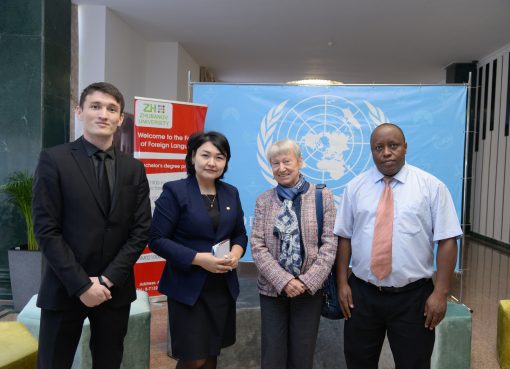 The conference “Model of UN”