Today at Zhubanov University was held the Academic Council meeting, chaired by the rector Bauyrzhan Erdembekov. On the agenda: the results of the 2017-2018 academic year and the tasks for the new 2018-2019 academic year.

Before discussing, council members took part in the exhibition, devoted to the results of the academic and research work of the last year. The heads of all structures, deputy deans, and heads of the departments attended the meeting; the rector of the University B. Erdembekov greeted all participants.

The head of the university congratulated the senior lecturer of the “Finance and Accounting” faculty, candidate of economic sciences Imanbaeva Zauresh Otegenkzy with conferring on her the academic degree of the associate professor.

According to Kuanyshbek Shunkeevich, this year all bachelor and master’s specialties passed 100% accreditation. He paid special attention to the university’s rating among the educational institutions of the country. For today’s day according to the results of an independent rating in the areas and levels of education conducted by the Independent Agency for Accreditation and Rating (IAAR) of RK, Zhubanov University took the 7th place among 58 universities of the country. The vice-rector also informed about the measures, which was taken in order to participate in the ranking of QS Universities: the creation of QS web site, a webinar with representatives of QS in London, a QS web applications, a profile of teachers and students, and a list of 402 experts and employers for the QS study. Currently, the preparation of the contract for working with QS documents is under way. QS World University Rankings pays attention to the reputation of universities in the academic environment and assesses universities on six indicators: research, teaching, employer opinion and career potential and the number of foreign students and teachers. In the framework of academic mobility, 273 students go outside the university. Among them 140 in Kazakhstan, 63 in China, 20 in Russia, 18 in Poland, 14 in Turkey, 11 in Lithuania, 6 in Kyrgyzstan and 1 in Latvia.

One of the important aspects is the employment of graduates, which has reached about 91% for the last academic year. The university conducts extensive work on the preparation of competitive specialists. The university gradually turns to poly-linguistics. The number of such groups are six. Sixty-eight teachers of Zhubanov University provide lectures in English.

During the meeting was approved the list of grants and discounts holders. For today, their percentage is about 45% from the total number. “The university has the different digital system like the “UNIVER”, digital document management, electronic maps and situational center”, noted Kuanyshbek Shunkeev.

According to the vice rector, an international conference “The quality management in the Higher Education System in Kazakhstan” will be attended by representatives of the independent accreditation and rating agency (IARA), the National Chamber of Entrepreneurs “Atameken” of the Republic of Kazakhstan, higher educational institutions of Kazakhstan and guests from abroad. All materials of the participants of the international conference will be consecrated in the pages of the scientific journal “ARSU Vestnik” and in the “Education. Quality Assurance” magazine of IARA.

The vice-rector Bibigul Abenova spoke about the main directions of educational and methodical work in the new academic year. According to her, the university took the 3rd place in “Education”, the 6th place in “Natural Sciences” areas, according to the results of institutional rating. Also in the 2018-2019 academic year, 57 educational directions for 30 educational programs are expected, 14 new disciplines within the framework of “Ruhany Zhangyru”. Bibul Seilovna noted that 17 textbooks translated into the state language under the project “Modern Humanitarian Education”. 100 new textbooks in Kazakh language are included in the educational programs. During her speech, the vice rector talked about the introduction of elements of dual education. For today’s day, these elements are available for 21 educational programs.

“In order to provide by educational staff low-grade schools, the university acquired licenses for related specialties: Geography-History, History-Religious Studies, and Mathematics-Physics. Applications were also be ready in specialties: “Chemistry-Biology”, “Mathematics-Informatics”, and “Physics-Informatics”. In the 2018-2019 academic year, licenses for this educational programs will be re-registered“- said Bibigul Abenova.

The University prepares teachers according with the renewed content of secondary education. The students of the final courses in the fields of Physics, Mathematics, Informatics, Biology, Chemistry, and Foreign Language: Two Foreign Languages will undergo practical study on upgrading program by Nazarbayev Intellectual Schools and will participate in the “Uiren – bolis”. From 2018-2019 academic year, practical classes on the discipline “Technology of Critical Evaluation” will be held in the branches of the faculties.

At the end of her speech, Bibigul Seilovna shared her recommendations on the quality and digital changes of education, the use of information technologies in education, training of competitive personnel and the Higher College.

During the meeting, a comparative analysis of the results of admission of applicants in 2018 was conducted and further plans discussed.

The meeting of the Academic Council continued with reports of the university staff on competent issues.

On the meeting, the Academic Council approved the work plan for the 2018-2019 academic year. 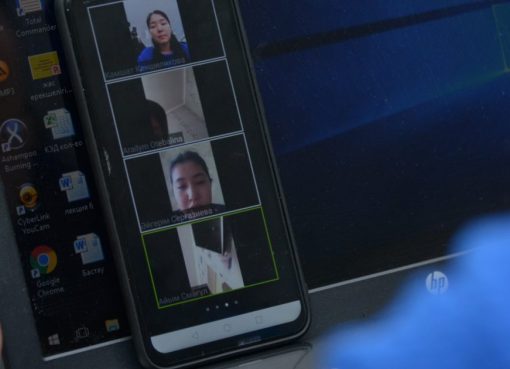 Students of the “Rosetta Stone”  program were awarded by certificates