On November 9, 2018, students of the 1 and 2 courses of the Faculty of Philology of the specialties “Russian language and literature” and “Philology: Russian philology” took part in the second round of the 1st Regional Interuniversity Olympiad in Russian language and literature, dedicated to the birthday of Moscow. The Olympiad was organized by the Russian World Foundation on the basis of Kazakh-Russian International University.

The first (extramural) round of the Olympiad was held in October 2018 and covered everyone who wanted to participate. The terms of the first round included: writing an essay “I would learn Russian only for that …” and fulfillment of test tasks in the Russian language. According to the results of the first round, 15 students were awarded certificates of participation in the Olympiad, which instilled confidence in their future victory. For students of 1-2 courses, participation in the Olympiad was a great opportunity to show their creative abilities and knowledge in competitions of this type.

The best 8 works were highlighted by the organizing committee of the Olympiad, and their authors were given the opportunity to compete in the second (full-time) round. They formed the team of the Faculty of Philology of ARSU named after K. Zhubanov.

The team prepared the literary and musical composition “Gold headed Moscow”, which was especially noted by the jury.

The second round was held as a team, while success depended on each player. Assignments were aimed at identifying the richness of speech of students. For this purpose, it was proposed to give meaning and etymology of rather rarely used phraseological units. Well-coordinated work team ARSU named after K.Zhubanov helped to quickly respond and correctly answer questions.

The competition program ended with awarding students with diplomas of winners. 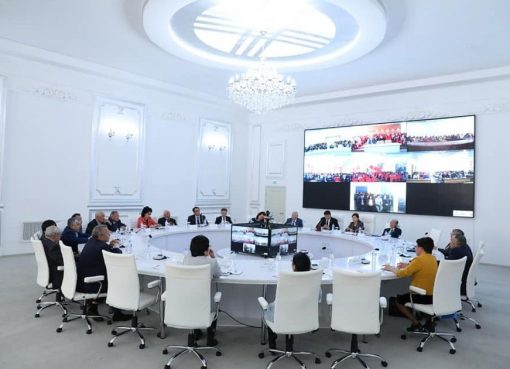