On the eve of the New Year 2019, the festive event “Zhuldyzdy zhana Zhyl!” – (“Star New Year!”) took place at Zhubanov University. The festive event was officially opened with the congratulatory speech of the Rector of the University Bauyrzhan Erdembekov. “The outgoing 2018 year is full of great memories. Among the best universities in the country, our university took the honorable 7th place, this year the number of students has reached more than 13,000 students, new undergraduate specialties, 15 new magistracy specialties and five doctoral programs have been opened. This year, the Higher College of the University opened its doors to applicants. At the same time, each faculty contributed to the development of our university, opening modern educational centers, laboratories, classrooms. These results were achieved not without the help of our students, said the head of the university. Expressing his gratitude to the staff, faculty and students of the university, the rector congratulated everyone with the upcoming New Year and wished them further success! The evening continued with the celebration of partners, sponsors and the best students of the university. The university’s partners were awarded a thank-you letter from the university rector, who throughout the year successfully conducted a number of important events related to youth policy. Thus, the head of the regional youth policy department Nurlan Kuntoov, the acting head of the regional youth resource center Ardak Bekniyazova and the head of the city youth resource center Zhandos Tabylganov were awarded. Further, were awarded the university athletes, who defended the honor of the university during large-scale sporting competitions for a year. A 2-year student, the world champion in mixed martial arts in weight 52.2, Bagdat Zhubanysh received a discount on training in the amount of 150,000 tenge. A student in the first course, the champion of various competitions in Audaryspak, a master of sports of international level in Audaryspak, Azamat Sergazin and a 2nd year student of the vocational school, champion of various competitions received a discount on training in the amount of 100 thousand tenge and the master of powerlifting Zhanasyl Habidulla. In addition, a 4-year student of the Faculty of Economics and Law Aziza Kulmagambetova was awarded the Letter of Gratitude; she is a scholarship holder of the Foundation of the First President of the Republic of Kazakhstan.

Zhiger Kenzhegaliyev, a 5-year student of the vocational and creative faculty, and Adelbek Bertluyev, a 4-year student of the technical faculty, won the nomination “Student of the Year”. After the ceremonial award of star youth, it was time for a gala concert. The concert began with the musical number of the show-ballet “Samruk”. Then with the Uzbek song “Oinaganda” a 1-year student of the faculty of “Economics and Law” Gulchekhra Zhollybaeva performed. Creative groups of the university also performed at the festive evening: dombrist ensemble, Big fam dance group, Samgau group, Element theater, ITF KVN team. Invited guests Askhat Targyn and Arman Zhienaliev delighted those present. By tradition, the New Year’s holiday did not go without Santa Claus and the Snow Maiden. In a

playful way, they gave the event a special festive spirit. The active participants of their games were presented gifts from Santa’s bag. The evening was completed with the song “Zhaka Zhyly” under the bright light of a cold fireworks fountain. 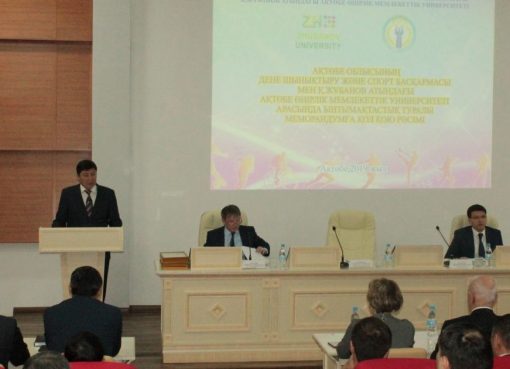 Awarding Ceremony at the Academic Council