Main > News > INTEGRITY SCHOOL OPENED AT THE UNIVERSITY OF ZHUBANOV 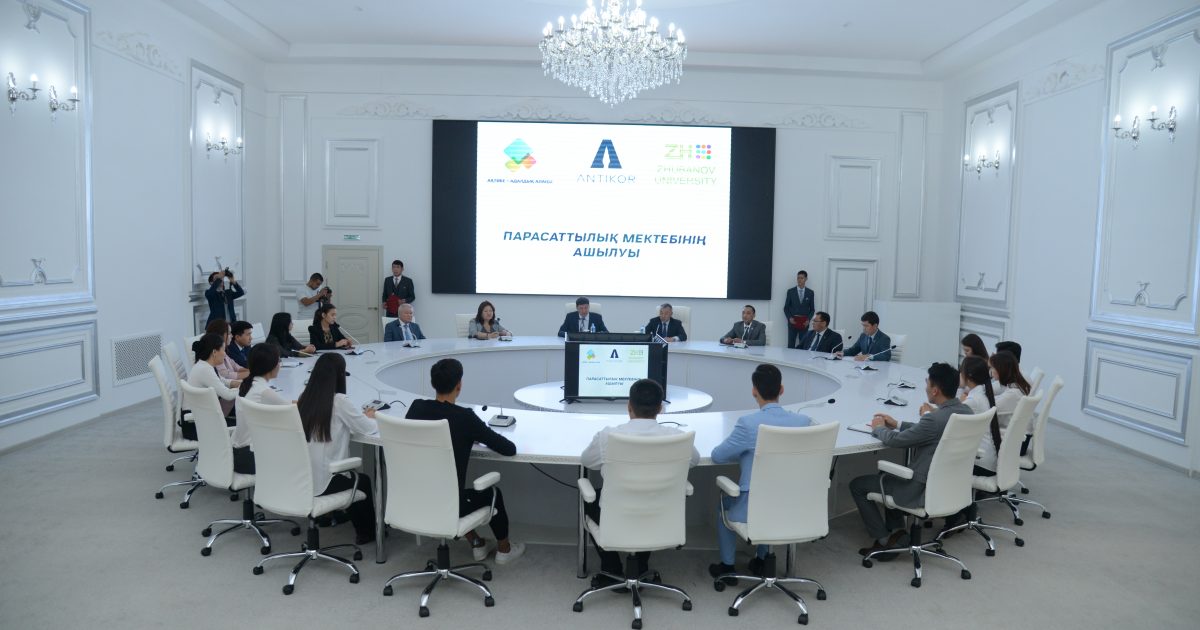 Today, together with the Agency Department of the Republic of Kazakhstan on combating corruption in the Aktobe region and Zhubanov University was open the “Parasattylyk mektebi” integrity school .

In the event the management of K. Zhubanov ARSU presented to the representatives of the anti-Corruption service a program of digitalization of the University, acquainted with the work of the Situation center, where with the help of the latest technology there is a video recording of the educational process in all classrooms and conference rooms, the result of which is regularly monitored. In addition, the audience watched the work of the honesty Store and the student service Center.

Then in a solemn ceremony with the head of the Regional Department of the National Bureau of anti-corruption Mirlan Mukhambetov rector of K.Zhubanov ARSU Bauyrzhan Yerdembekov opened an office “Parasattylyk mektebi”. As noted by the organizers of the project, the name of the school fully justifies the essence of the work carried out to introduce and entrench the principles of integrity among youth. In this school for students throughout the school year will be conducted coaching and training by various speakers.

During the meeting with students and teachers of Zhubanov University, the head of the Regional Department of the National Bureau for combating corruption Mirlan Mukhambetov spoke about the importance of compliance with the laws and thanked the leadership of ARSU for working together and assistance in preventing corruption.

The rector of the Zhubanov University Bauyrzhan Erdembekov, in turn, he told about the work carried out:” the Department of monitoring of the quality of Zhubanov University regularly conducted an anonymous survey among students of the fact of identification and the fight against corruption. Also during the examination period in the framework of the campaign “We are for a clean session”, the University operates a call-center, which accepts appeals on the fact of corruption violations. In addition, the University tightened the requirements for diploma projects, increased GPA (average student achievement score)”, — said Bauyrzhan Amangeldyevich.

During the meeting they also discussed the work of the student club “Sanaly urpak”, which is the official project office of the Republican project and unites 4 universities of Aktobe region.As a result of this project, teachers and students share their ideas on the formation of anti-corruption culture of students and eradication in educational institution of manifestations of the facts of corruption.For example, a participant of the club 3rd course student of the faculty of Economics and law Rahima Bakhitzhankyzy presented the project mobile game offering real-world situation and proceed with consideration of compliance with laws and ethical standards, and senior teacher Nurgul Urbisinova arranged a short training.

Following the discussion between K. Zhubanov ARSU and Department of Agency of the Republic of Kazakhstan on combating corruption in the Aktobe region signed a Memorandum on cooperation and opening of the project “Parasattylyk mektebi”, which aims to educate society with a high culture of behavior, unshakable principles of fairness and justice.

K. Zhubanov University signs the memorandum with major regional banks of the organization of professional internship

Expansion of international cooperation with partner University of Economy in Bydgoszcz