Main > News > MEETING WITH STUDENTS OF THE “BILIM INNOVATION” LYCEUM.

Rector of Zhubanov university, a famous abayevedian met with students of the lyceum “Bilim innovation”.

At the meeting, doctor of philological sciences, professor Bauyrzhan Yerdembekov shared his research on the personality and creativity of Abai, stressing the importance of Abai’s works, which were closely intertwined with the natural nature of the nation, stressing the need for a deeper understanding of the poems and statements of the great thinker. He also stressed that in each of the poems of A.Kunanbayev there is philosophical thought and answers to many pressing today’s questions.

Talking of symbolic personality not only for the kazakh people, but also for the whole world, Bauyrzhan Yerdembekov noted that by reading Abai the youth can grow spiritually, become even more united.

Pupils of “Bilim innovation” lyceum were told about many events that are held within the 175th anniversary of A.Kunanbayev at Zhubanov University. In particular, about the scientific and cognitive expedition “Zhubanovtan Abaiga”, dedicated to the 85th anniversary of the University and the 175th anniversary of Abai, which visited the iconic places on the route: Aktobe – Nur-Sultan – Pavlodar – Semey – Zhidebay – Semey – Karaganda – Nur-Sultan – Aktobe. And also about the project “Zhubanov   kerueni”, in the framework of which representatives of the University visited 12 districts of the region, where about 500 copies of author’s books Bauyrzhan Yerdembekov “Abaytanu” were given to school libraries.

At the end of the meeting, professor Bauyrzhan Yerdembekov presented the book “Abaytanu” to the fund of “Bilim innovation” lyceum. 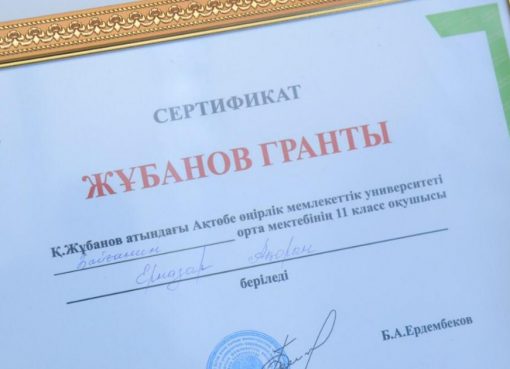 The festival of students’ song “Sing guitar – 2018” in Aktobe

The historical faculty was ended by 91 graduates