The event was attended by akim of Aktobe region, representatives of the Ministry, heads of regional departments, district and city departments of education, deputies,school principals, veterans of education, University rectors, including the rector of K. Zhubanov ARSU Bauyrzhan Yerdembekov.

In his speech, Bauyrzhan Amangeldyevich mentioned problems in education, on which in particular the Zhubanov University is working . For example, the rector spoke about the introduction of new dual educational programs (Mathematics- Informatics, Mathematics-Physics, Physics-Informatics, Chemistry-Biology, History-Religious studies, Geography-History), allowing to compensate for the lack of subject teachers, as well as specialties “Kazakh, Russian language and literature” and “Russian Philology” preparing for missing teachers of the Russian language.

In addition, Bauyrzhan Yerdembekov noted the importance of career guidance aimed at training specialists in high demand: “We were bewildered by the fact that school leavers are beginning to choose their future profession in the delivery of documents to the University, or only those specialties for which grants are allocated. As a result, they are among the unemployed.” According to the head of the University, career guidance work in cities and districts should be conducted not only by the University itself, and begin with 8 or 9 classes, and as subject teachers, class teachers, but also by parents themselves, who should play an important role in choosing the profession of the child, so that in the future the specialty was in demand in the market. In turn, Zhubanov University opened a center for professional development and career, which among the five Republican centers helps graduates to find a job.

As part of the report at the conference “BІLІM JÁNE ǴYLYM!” rector of K. Zhubanov ARSU told about the increase in the rating of the University, which occupies the 4th place among 56 universities of Kazakhstan, as well as the dynamics of growth in the number of applicants. In particular, that the number of

University students exceeded 16 thousand, 8 thousand of them are trained in pedagogical specialties. Only this year about 6 thousand people arrived: more than 170-owners of the breastplate “Altyn belgi”, 200 – excellent students, winners of international Olympiads and competitions, 1400 students received state grants and grants of the akim of the region.

At the ceremony akim Ondasyn Orazalin has awarded winners of competition “the Best organization of education” and the best of the teachers. Through the Ministry of education and science, breastplates were awarded to teachers, honorary workers of education, and veterans of labor, including senior lecturer of the professional and creative faculty of K. Zhubanov ARSU Abdrashid Raimbergenov.

In total 1200 people took part in the conference. 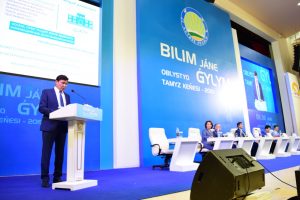 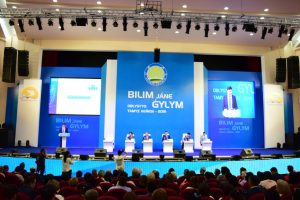 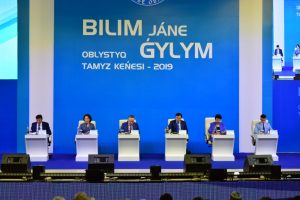 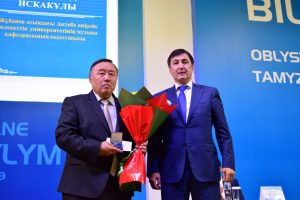 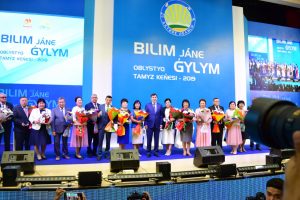 Still a schooler, but already a student